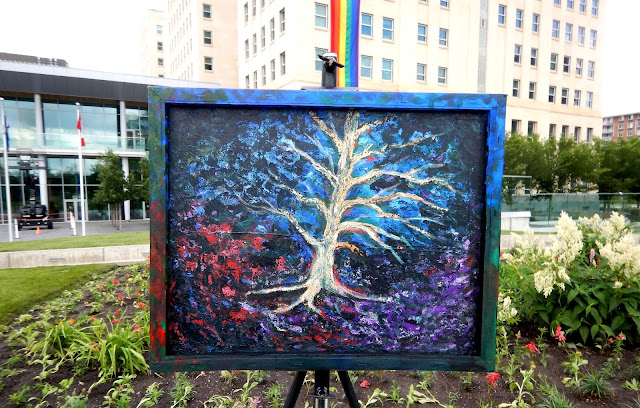 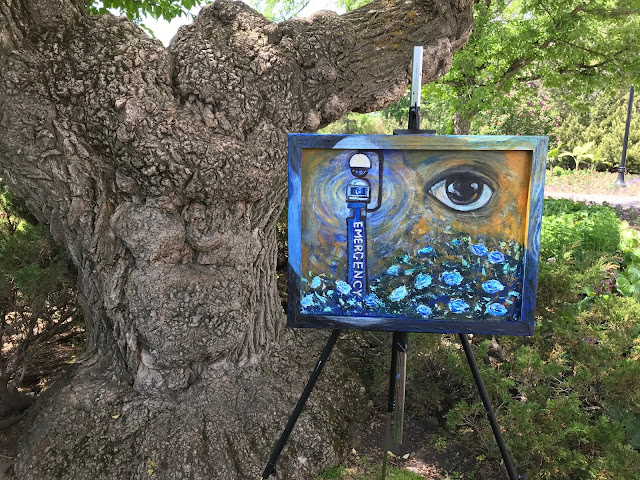 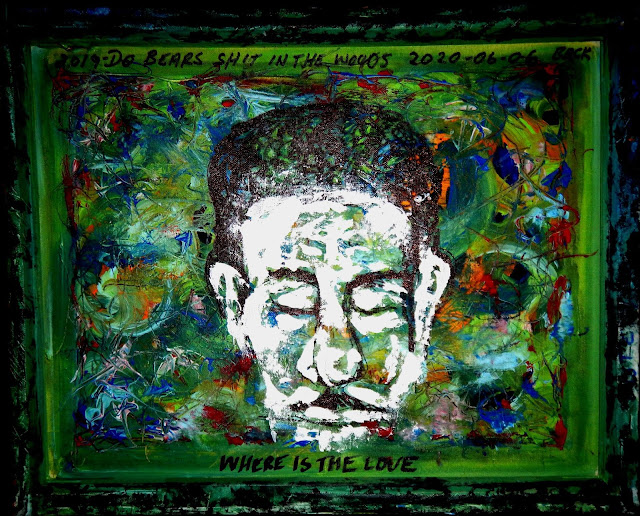 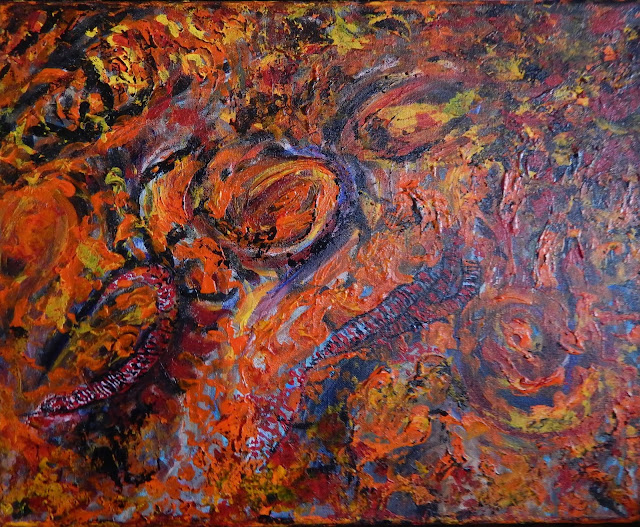 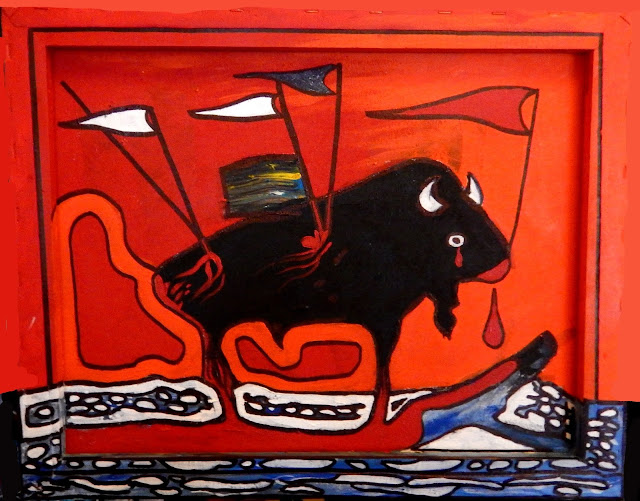 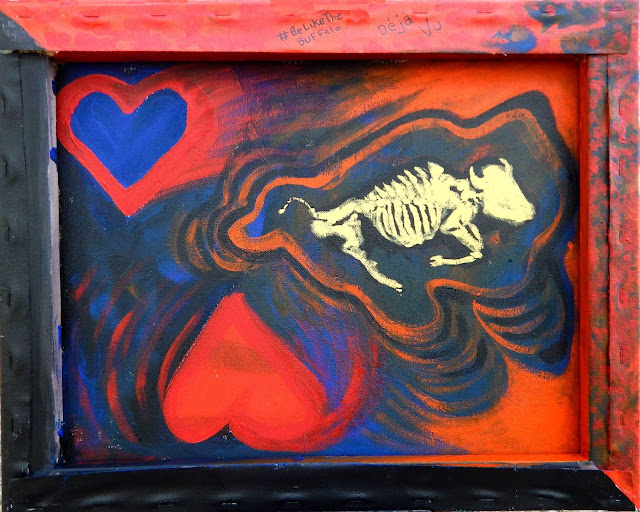 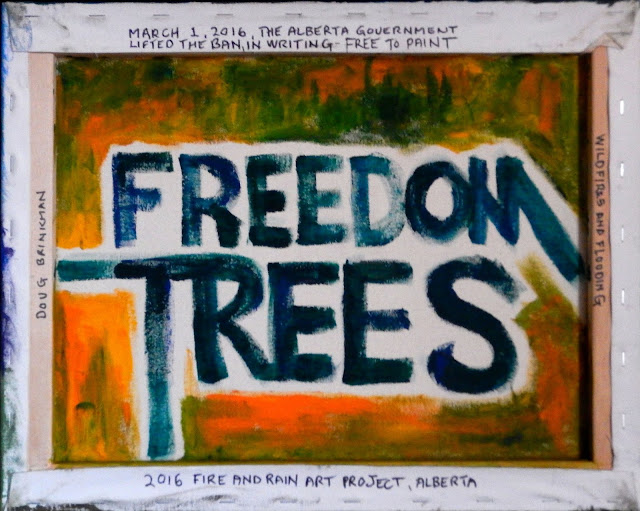 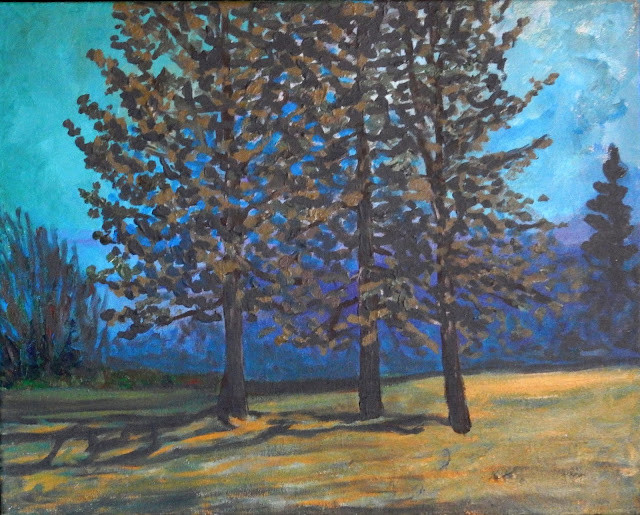 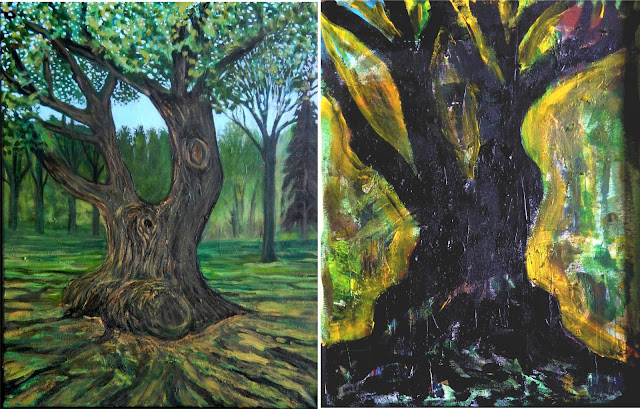 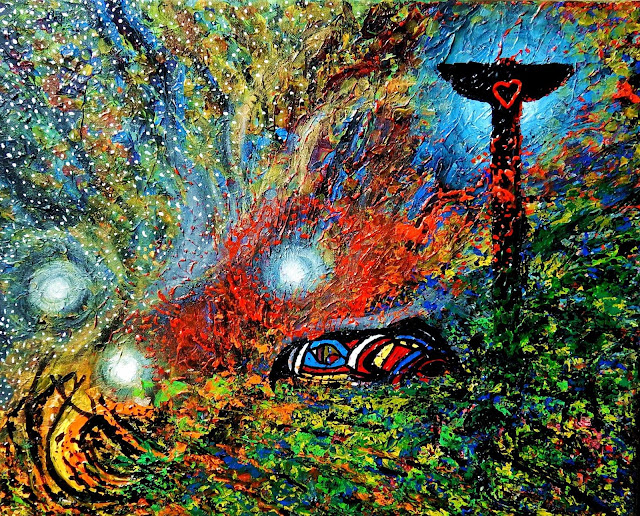 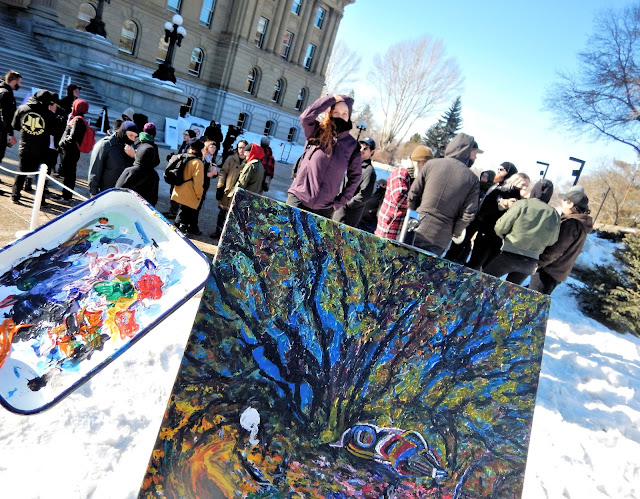 On location between Yellow Vest protesters and counter-protesters

I completed 'Trouble maker, the coming storm' later that summer 2019, next to UCP Premier Jason Kenney's office. I began painting October 2017 next to Rachel Notley's office adding a homeless person sleeping under an Alberta Legislature tree, outdoors in the harsh Alberta elements. The person was protected with a multi coloured blanket inspired by the robe of many colors, the garment that Joseph owned, which was given to him by his father Jacob. In 2019 one of the Alberta Sheriffs could not see the homeless man that I painted, but the head of an eagle. This fascinated me because for me art is interpreted by the eyes of the beholder, so I painted a totem with heart with the broken off head of an eagle that laid at the base of the totem. The orbs were originally supposed to be headlights of a police car or off road truck of hunters coming to disrupt the sleeping homeless person. Snow like speckles were later added to represent the beginning of a snow storm. It wasn't until the corona virus of 2020 that hit and crippled the world that I began to interpret these orbs as the COVID19 virus.

YouTube: October 17, 2017 Alberta Legislature grounds, next to Alberta Premier Rachel Notley's office I began to paint 'Trouble maker, the coming storms' This painting was completed the summer of 2019 outdoors next to Alberta Premier Jason Kenney's office. "Trouble maker, the coming storm" was painted over another painting showing the construction of the new Walterdale bridge. 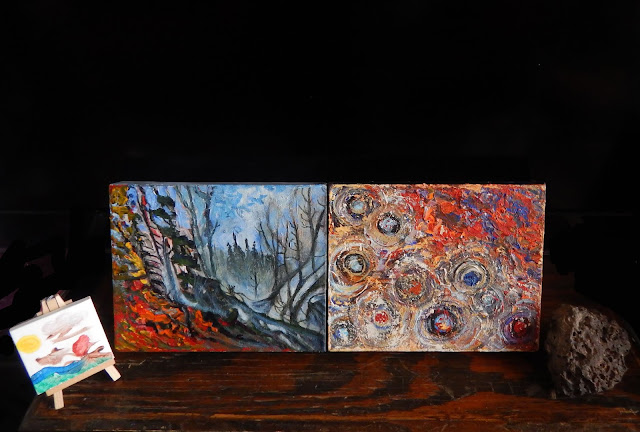 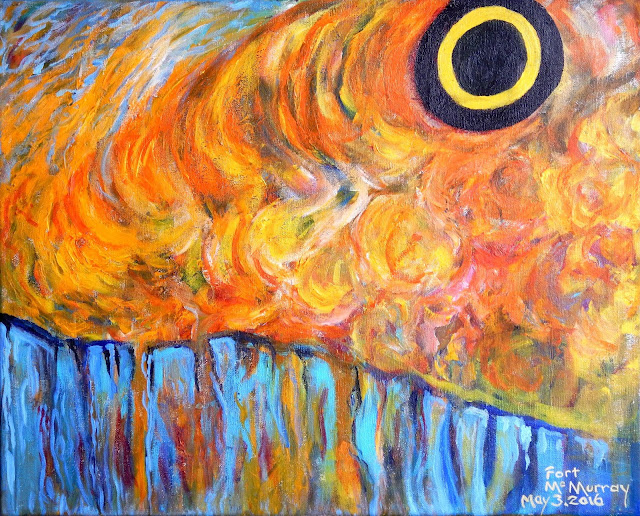 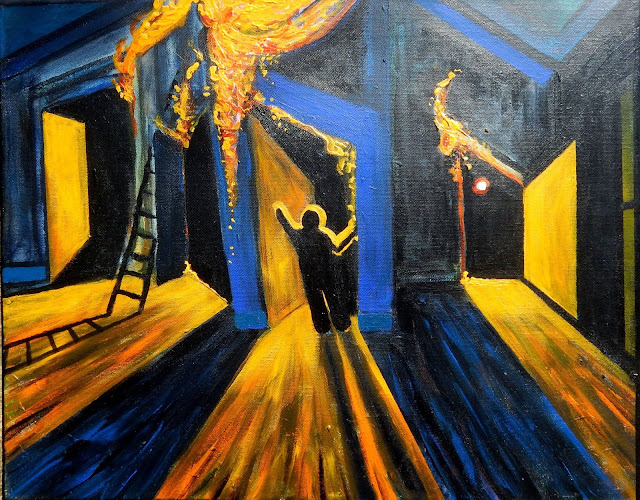 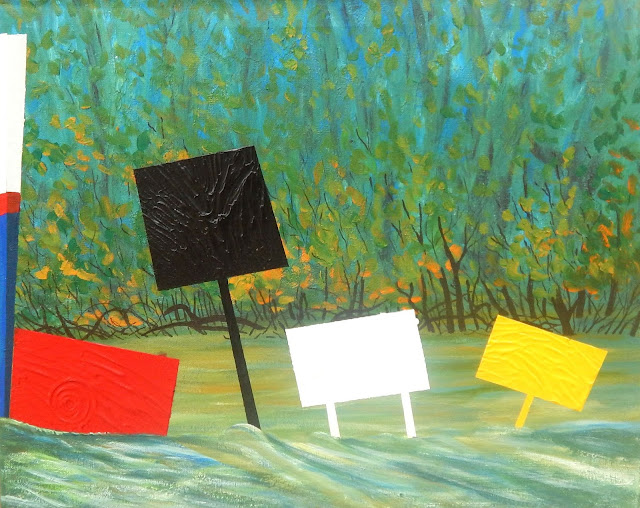 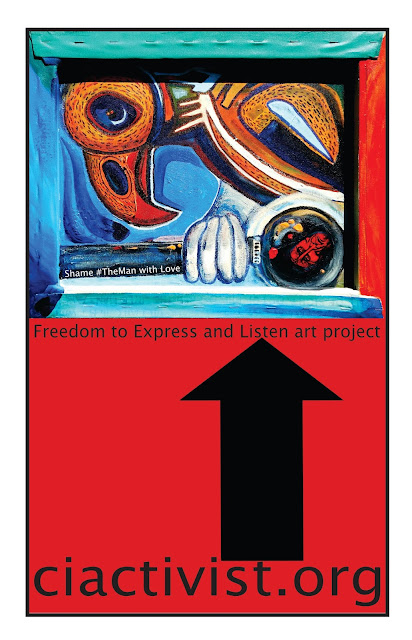 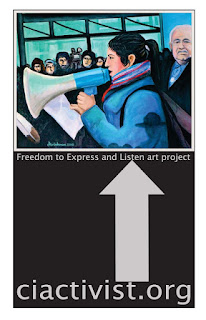 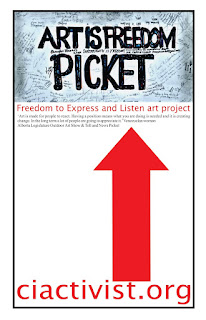 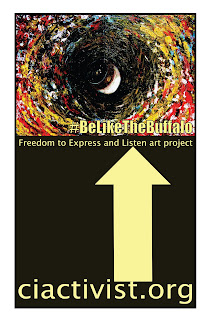 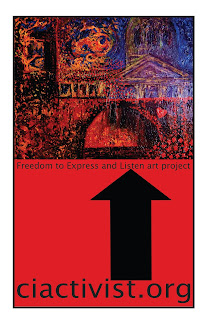 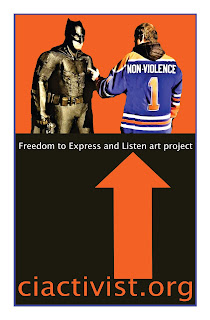 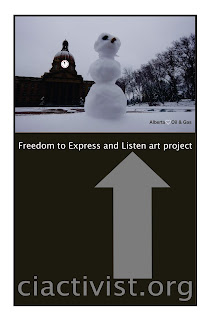 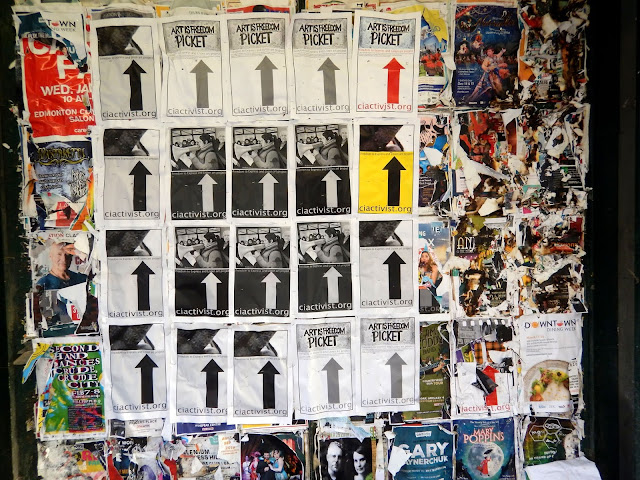 Do Bears Shit In The Woods? Sgt-At-Arms bans

One year ago today, on the Alberta Legislature grounds, noon hour painting "Do bears shit in the woods?" unfinished painting tha... 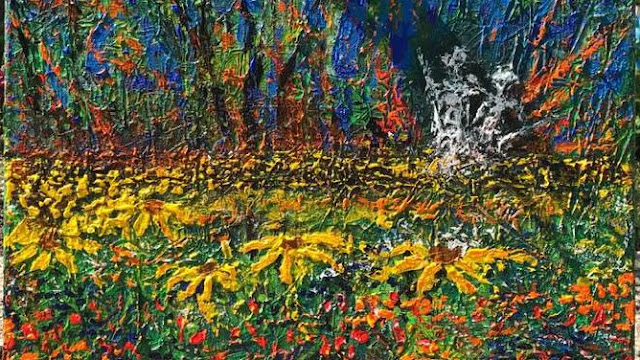